It’s that time again – when Iain Dale at Total Politics wants to hear from the e-community their verdict on this year’s blogs. You can see details here.

I thought David Laws’ resignation was dignified and full of integrity – as is he – but very sad to watch.

This matter is now for the authorities to investigate – and will take its course. David’s brilliance is a serious loss to our government and our country – particularly at this time of great need.

But outside of the proprieties or otherwise of David’s arrangements for housing and financing thereof – what I saw when I watched his resignation statement – was the personal pain of an individual who has not felt able to be open about their sexuality.

However progressive our laws are – we have not yet reached the point where young people feel completely free about coming out. Iain Dale has a very good piece in the Mail on Sunday about his own experiences and the difficulties of coming out to his family and friends – and coming from a small village. Yes things are changing – but these personal matters are still not easy for the variety of reasons that Iain sites.

During anti-bullying week at the end of ’09, Nick Clegg said:

‘It’s a sad fact that looking or acting ‘gay’ can instantly make someone a target in thousands of schools across the country’.

‘Until we deal with homophobia in schools, we’re never going to stamp out wider discrimination in society’.

Both Liberal Democrats and Conservatives highlighted this issue in their manifestos. In the coalition agreement it appears thus: ‘We will help schools tackle bullying in schools, especially homophobic bullying’.

David Laws’ untimely and sad departure from the cabinet demonstrates how very far we still have to go and how very right the coalition is to pursue this issue – for all our sakes.

Writing about Iain Dale’s bid to become PPC for Bracknell the Daily Mail has resorted to its usual approach to those it disapproves of. ‘Isn’t it charming how homosexuals rally like-minded chaps to their cause’ is one of the homophobic remarks made by the Daily Mail in guise of Ephraim Hardcastle . Of course – this is free speech and the Mail can say it – but Iain Dale is quite right to hit back and show the remark up for what it is – homophobia.

Well – I see that the Total Politics top MP blogs are with us again – thanks to Iain Dale’s devotion to measuring everyone and everything in blogworld! Anyway – this year I come in at number 8 – which is still in the top 10 – albeit a descent from the giddy heights of number 5 last year. Apparently this is voted on by 1,500 people or so – so that’s pretty good going. Thank you!

A big thank you to Iain Dale’s readers for his 2008 political poll where, whilst I trail Vince Cable miserably (and rightly), I am a) in the frame and b) second! as Lib Dem MP of the Year! Thus I continue my saga of always the bridesmaid but never the bride! I also notice that his magazine Total Politics has me as one to watch – and that’s what my teachers used to say – ‘ better keep a close eye on her’ – although I think their meaning may have been different…

On my own side – I likewise see (thanks to those who have brought it to my notice) that in the Liberal Democrat Voice poll I again am trailing Vince! Well – the man is a star and being even near licking distance of boots is honour enough! But there is still time for you to vote…

Iain Dale’s doing his annual best blog competition, so here are my top ten political blogs which I’m sending in.

First there are the regular ‘must reads’:

1. Liberal Democrat Voice
2. Iain Dale
3. Guido Fawkes (Love Iain and Guido, or hate them, or love and hate them both – they are a pretty much essential read, frequently breaking stories that are then ones we all pay attention to.)
4. Liberal Conspiracy (The content isn’t as much of a ‘must read’ for me as the previous three, but Liberal Conspiracy has the best discussion in the comments. It’s the place where pieces from myself generate the most interesting discussion compared with the other sites where my words sometimes appear.)

(And yes – no Labour equivalent there. The Labour ‘home’ style sites aren’t quite there yet – at least for an outside like myself.)

And for the other six:

5. Labour MP Tom Harris (Frequently disagree with him – but a great blogging style and manages to be interesting and thought provoking despite also being a pretty much always on message Labour minister. Not an easy combination to pull off!)

6. James Graham’s Quaequam (A previous Liberal Democrat Voice ‘Blog of the Year’ winner and one of the best pugnacious bloggers around – showing how you can be very robust in your arguments without simply lapsing into empty insults.)

7. The Times’s Red Box (I feel it’s a bit of a cheat to include a blog that is really a newspaper online, but this is an excellent example of this genre at work.)

8. Dave Hill (Really came to prominence for many people during the London elections this year – and continues to shed light on what is happening in London government.)

9. Helen Duffett (Helen’s worked in my office helping with casework. I’ll let you judge whether that means her excellent blogging is because of or despite this link!)

10. And of course, the best blogging pink dog in the world, Pink Dog (Where else would I find out about spoon crime?)

You can cast your own votes too by sending your top ten to toptenblogs@totalpolitics.com Modesty forbids me to include my own blog in my top ten, but don’t let that put you off voting for me!

Yesterday Iain Dale interviewed me about Prime Minister’s Questions and the Budget for Friction.TV. You can watch the result here – it was just a bit windy! 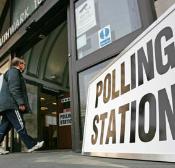 It’s 80 minutes into an Arsenal-Tottenham football derby. Tottenham lead 1-0. Arsenal are piling on the pressure. The Tottenham manager shouts at the ref, “OK, that’s it – can we have the final score now please?” The ref agrees, all the players troop off the pitch 10 minutes early and Tottenham get the three points.

Sounds absurd doesn’t it (and I don’t just mean the idea of Tottenham beating Arsenal!)?

But that’s what passes for normal in the world of Palace of Westminster politics when it comes to general election dates. The Prime Minister – and the Prime Minister alone – gets to choose the date. Now – in theory Parliaments last for five years and the monarch has to agree to any earlier election, but in practice – the PM always gets his or her way – and they shouldn’t.

Which is why, even though the immediate fuss after Gordon Brown’s general election that wasn’t has died down, I’ve returned to the topic in my latest magazine article – which you can now read on my website.

It mentions www.fixedterm.org.uk – which is a cross-party campaign on this very topic, including the likes of bloggers Iain Dale (Conservative), Stephen Tall (Lib Dem) and Sunny Hundal (of Liberal Conspiracy), MPs Ed Vaizey (Conservative – and my frequent sparing partner on The Westminster Hour) and former Lib Dem leader Ming Campbell, and journalists including Benedict Brogan of the Daily Mail. If you agree with me on the issue – do go and sign up to support it. And if you don’t – read my article, and perhaps you’ll be persuaded!

As Liberal Democrat Voice has pointed out, readers of Iain Dale’s blog have voted this the third best Liberal Democrat blog. Details over at LDV; thanks to those who voted for me – and congratulations to the LDV team and to Nich Starling for grabbing the two places above me.

Interesting poll by Iain Dale on his website of how his readers think MPs of all parties have been performing in the last month. 1,256 blog watchers voted and they rated the performance of a selection of MPs over the last month.

Both our Liberal Democrat leadership candidates are in the top quarter, Chris at 10 and Nick at 21! Not bad for a Conservative originated contest on a website with a heavily Conservative readership!

However, both might like to look at the methodology of the occupier of the No. 1 spot for guidance when our new leader is declared and take a leaf out of the Cable book of stealing the limelight – for it is indeed Vince Cable who comes out as the top rated MP over the last month. Well done all three.