Lynne Featherstone has contacted Homes for Haringey to demand an update on urgent repairs to the Noel Park estate.

The Liberal Democrat MP held a public meeting in Noel Park three weeks ago, to give residents the chance to have their say and raise issues with housing chiefs from Homes for Haringey and Haringey Council.

Dozens of residents spoke of their need for urgent repairs, which Homes for Haringey agreed to fix as a priority.

The Wood Green MP has also contacted residents to ask them about the progress made.

The public meeting was called because of the lack of Decent Homes and urgent repair work being made to the houses on the Noel Park estate – a real let down to residents, particularly in light of the recent Homes for Haringey bonus scandal.

“Increasingly, residents from the Noel Park estate are coming to me for help with their housing, because Labour-run Haringey Council and Homes for Haringey just won’t listen to them or take action.

“Enough is enough. It is so unfair for residents to live in such bad conditions, while Homes for Haringey repair staff receive £3.7 million in bonuses.

“I will keep chasing Homes for Haringey to make these repairs. I am asking residents to keep me informed, too, to make sure I get the full picture.”

A couple of weeks ago I held a meeting (packed) for residents of the Noel Park estate where they could tell Homes for Haringey and Haringey Council face to face about the appalling failure on repairs. Tale after tale of real suffering due to repairs not being done or done so badly they needn’t have bothered.

Today the  Tottenham and Wood Green Journal highlights – with a brilliant example – a level of incompetence by Homes for Haringey that is beyond belief.

‘Haringey’s council housing arm has come under fire after sending a bricklayer to fix a woman’s mould-covered window and then a gardener to repair her broken stair.

Staff at Homes for Haringey (HfH) then ignored her complaints, telling her all the repairs had been done, according to their reporting system.

Teresa Martin, 68, regularly called HfH to chase up progress on repairs to the maisonette she has lived in for 32 years in Lordship Lane, Wood Green.

But a gardener used the only material he had to hand – some garden fencing – to repair a collapsed stair after he was assigned to the job, and a bricklayer was sent packing after being dispatched to treat and fix her mouldy windows.’ 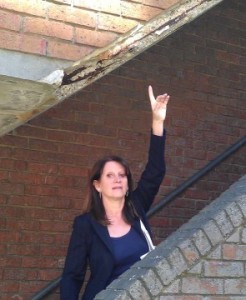 Lynne Featherstone MP visited the Sandlings estate in Wood Green recently to hold an advice surgery, where she met and discussed various issues with local residents.

During the Surgery, the MP used an external staircase to visit a resident’s flat. On the way back down the staircase, the MP noticed a small warning sign. The sign was written on paper, which had been ripped, with a handwritten message:“please use other staircase until further notice – please do not use this staircase, ceiling unsafe.” There was a crumbling section of ceiling above the first set of steps.

The Liberal Democrat MP for Hornsey and Wood Green promptly contacted Homes for Haringey, and today received a response. The response confirmed that a specialist concrete repair was required and an external contractor would be used to carry out the work.  The works are scheduled to start this week.

“I was shocked and concerned at the state of the ceiling – which was highly dangerous and a hazard to all users of the stair case. The written sign was an insufficient warning – neither my assistant nor I noticed it when we first went up the stairs. A hazard like this should have been cordoned off, and repaired as soon as possible.

I am very glad that, following my intervention, the necessary repairs will now take place.’

Concern is growing for the safety of local residents living in a housing block in Alexandra ward after Haringey Council and Homes for Haringey failed to take action to improve security despite many incidents of crime and anti-social behaviour over the past year.

Tenants and leaseholders in Bolster Grove have been forced to put up with constant vandalism and intimidation as local vandals use the main stairwell leading to residents’ homes as a hang out. Recent visits to Bolster Grove have revealed many incidents including the windows of the main entry door have been broken, windows in the stairwell forced open, window frames burned, fires being started as well as the area being regularly strewn with dropped food, litter and used condoms.

However, since the most recent incident on 11th October 2009, Homes for Haringey has not repaired the main entry door, leaving smashed glass in place and homes unsecured.

Local Liberal Democrats have continued to raise the issue, along with the need for door entry systems, with Homes for Haringey bosses and even brought the issue to the attention of Cllr John Bevan, Labour’s Cabinet member for Housing, at the last Full Council meeting on 19th October 2009. Despite this, no action has been taken by Haringey Council.

“It is unacceptable that after months of incidents including fires, antisocial behaviour and damage to property, residents of Bolster Grove still do not have an idea when their homes will be made safe.

“Some residents are afraid to leave their homes unoccupied whilst the entrance door is broken. It needs to made safe now and the Council should not wait until a more serious incident occurs before they take action.”

“Local residents should feel safe in their own homes. Yet the lack of action by Haringey Council at Bolster Grove only leaves people feeling harassed and their homes unsecured.”

Haringey Council will now investigate the feasibility of an ‘opt out’ from the installation of new digital aerials scheme for local leaseholders. The success for the campaign led by leaseholder groups and Liberal Democrats came after a special meeting of Haringey Council’s ‘watchdog’ committee last week (1st October 2009) to hear concerns raised by Liberal Democrats.

The committee agreed that Homes for Haringey should report back on the possibility of an opt-out for leaseholders who do not want the new aerial system installed. Since Haringey Council started the scheme, many leaseholders have paid more than £1,000 for installation.

Liberal Democrats have welcomed the feasibility report but have said that they will not stop the campaign to get a better deal for local leaseholders and will continue to closely scrutinise the financial management of the Decent Homes project, which has come under increasing criticism.

“Whilst we welcome this small step in the right direction it was disappointing that the Labour councillors, once again, rubberstamped this dubious cabinet decision.

“The Decent Homes programme and budget continues to be out of control. Agreed standards of work have been exceeded without finance in place, leaseholders have been ignored, and consultation has been non-existent.”

“I was shocked at the lack of understanding of how this £198 million scheme has changed so much. Nobody seemed to know how Homes for Haringey had veered away from the specifications agreed by Haringey Council in 2005 and, more worryingly, nobody seemed to grasp that this may have an effect on the standard or amount of homes that will be renovated under Decent Homes.”

“The way in which leaseholders have been treated is a symptom of the failure by Haringey Council to get value for money from this project. I’m glad efforts from local leaseholders and my Liberal Democrat colleagues are making progress, but we will not stop there.”

Note: Local Liberal Democrats have set up a petition at http://campaigns.libdems.org.uk/aerialscampaign

Homes for Haringey (Haringey Council’s arms length management organisation for council houses) have just admitted to my Lib Dem colleague, Cllr Monica Whyte, that residents of Stokely Court (sheltered accommodation for the elderly and disabled) will have to wait yet another year before their homes will be redecorated – four years after the Council promised that they would be renovated and ten years since they were last redecorated.

Monica Whyte has written urgently to the Chief Executive of Homes for Haringey to explain why Stokely Court has been neglected and how many other sheltered accommodation homes have been missed due to the “slippage” of the Internal Decoration Programme for Elderly and Disabled Tenants.

Monica is on the rampage – quite rightly!

If anyone knows of any more instances where Haringey Council has failed to meet its promised obligations on redecoration, repair or renewal – please let me know.