Health Minister Norman Lamb will attend a public meeting in March, to discuss his work on the NHS, social care, and mental health with local residents.

The meeting – arranged by local MP Lynne Featherstone – will take place at 7:15pm on Wednesday 25th March at a venue in Hornsey.

In Government, the Liberal Democrats have:

The Liberal Democrats are the only party to have pledged an extra £8bn in NHS funding if they are in Government after May.

“Liberal Democrats believe that the NHS should always remain free at the point of delivery. In Government, Norman Lamb and his team have protected the NHS budget and put mental health on the agenda.

“I’m very much looking forward to welcoming Norman to the constituency, and hearing about the work he has done to protect the NHS, improve social care, and to ensure that mental health is on the same platform as physical health.

Great news! Haringey’s health services are getting an extra £23.5 million this year – following our local fairer funding campaign.It’s a massive 5% increase from last year, and it’s a huge step towards getting truly fair funding for our local services, residents, and health workers.Take a look at this short video – featuring residents, midwives, a new mum and me. It’s about why I started the campaign, and the impact the extra money will have!

Thank you to everyone who supported the campaign for fairer funding. You can see from the video just how much it means.And it won’t stop here – I’ll keep campaigning for more money, and the Lib Dems have pledged £8bn in NHS funding during the next parliament. 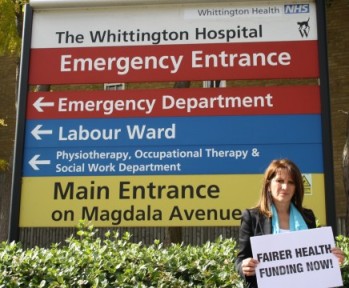 Lynne Featherstone MP wrote to the Chief Executive of NHS England last week regarding the money received by health services in Haringey.

NHS England is due to make an announcement on a new health funding arrangements by the 17th December. The changes will see some areas receive more money, in an attempt to make funding fairer across the country.

The MP for Hornsey and Wood Green has long campaigned for fairer funding for Haringey. As part of the campaign, the local MP exposed figures which reveal that Haringey receives hundreds of pounds less per person, per year, than neighbouring boroughs such as Camden and Islington.

The Lib Dem MP submitted a report to NHS England, to put forward the case for an increase in money for Haringey health services – and has pledged to continue the fight for fairer funding if Haringey does not receive an increase this time.

“Last year alone, Haringey received £70m less funding than Camden in total. This is just not right – levels of deprivation and need in Haringey are now at least equal to those in inner London boroughs, so we need just as much funding.

“This underfunding is having a direct impact on nurses, doctors and patients in Haringey – and that’s why I started this campaign alongside the Haringey Lib Dems and local residents.

“NHS England agreeing to review the formula was a great step forward in the campaign – but of course they have to change it for the better!

“I have sent in extensive submissions and a report to arguing for more funding for Haringey. I very much hope we see an increase in funding, but if we don’t – the fight goes on.”

Haringey Liberal Democrats have just launched a campaign to make sure residents living near the Borough boundary can access GPs in neighbouring boroughs.

The action comes after residents in Stroud Green have complained of not being allowed to register with GPs surgeries just over the border in Islington.

Local councillors Katherine Reece and Richard Wilson have already met with NHS Haringey who acknowledge that registering with a GP can be a serious problem for residents in Stroud Green.

Nationally the Liberal Democrats in government are pushing to give patients the right to choose to register with the GP they want, without being restricted by where they live.

“It’s ridiculous that residents on the north side of Stroud Green Road cannot always use GPs on the south side of the road due to bureaucratic wrangling.

“We are surveying residents in Stroud Green to find out just how bad the situation is, and will be bringing the results to health bosses.”

“It’s great that Liberal Democrats in Government are working on changing the rules about where you can register for your GP. We want to do our bit here in Stroud Green.

“However Islington PCT is refusing to recognise there is a problem with cross-border GP access.  We hope this survey of local residents will change their minds and force them to work with GPs to widen access.”