Lynne Featherstone, Liberal Democrat MP for Hornsey and Wood Green, has today called on Labour-run Haringey Council to ensure that the distribution of new funding for education is truly fair.

After a hard fought five year campaign, Lynne Featherstone and the Haringey Liberal Democrats secured fairer funding for education in Haringey. As a result of this, an extra £7.3 million has been allocated for Haringey’s schools.

The additional funds from the fairer funding settlement have gone a long way to ending the long-standing funding anomaly – which saw local schools receiving outer London funding but paying inner London costs. Haringey Council will shortly be able to allocate the extra money directly to schools in the borough.

The £7.3million in fairer funding money is in addition to the £8.8million allocated to Haringey schools through pupil premium. The pupil premium is a separate amount based on a Liberal Democrat Government policy to give more money to schools in accordance with the number of disadvantaged children.

“We now want to ensure that the money will be distributed fairly and proportionally throughout the borough’s primary and secondary schools.”

“Poverty and disadvantage are present all over the borough. All of Haringey schools already pay Inner London pay scales, so they should all get a share of the money to assist them.

“I have written to the Interim Chief Executive and called on the Labour-run Council to ensure that the money reaches every school in Hornsey and Wood Green, as well as those in Tottenham.”

The past definitely comes back to haunt! Reading this from the Liberal Democrat leader, Caroline Pidgeon, on the London Assembly took me back to my Assembly days. Bike hire didn’t start with Boris – but who cares – it’s still a very good move.

Just back from the Pride march – what an amazing event – what a wonderful day!

There is something so empowering, so overwhelming – about marching, expressing – having a demonstrative voice. So much of the time there appears a passivity – as if nothing can be done, nothing can change. But from the Stonewall riots 40 years to today’s Pride march in the London sunshine – every gay, lesbian, bisexual and trans individual that has had the courage to stand up against  prejudice and fight discrimination – has shown the courage and determination that can change and has changed the world.

I spent the first half of the march at the front with Boris Johnson and Nick Herbert – the policing Minister. Then I walked back through the march to find the Liberal Democrat contingent. They had produced fabulous placards for all of us which said ‘Liberal Democrats – Proud to represent you in Haringey, or Hackney or Richmond or Government or London.

And in the LibDem contingent were lots and lots of LibDems from various boroughs – and then there was Brian Paddick (stood for LibDem mayor of London); Caroline Pidgeon (Leader of the LibDem group on the London Assembly); Ros Scott, (LibDem President); Sarah Ludford (LibDem MEP for London). Ed Fordham (LibDem candidate for Hampstead & Highgate); Ed Butcher, (Councillor in Haringey) and many, many, many more – including Steve Gilbert (MP for St Austell  & Newquay).

Then towards 3pm I had to make my way to the stage area in Trafalgar Square where Nick Herbert and I were going to give short speeches.  Dr Christian from ’embarassing bodies’ introduced us.

We had decided to go on together – as a double act – so to speak. Nick spoke first and told of his selection and election – and how the selection committee, when he told them he was gay, had said no probs! Nick got a huge cheer when he opened by saying that he was gay. I couldn’t match that – but nevertheless – also got a good reception when I spoke about ending the ridiculous situation where a man who had consensual sex with another male (over 16) 30 years ago would still have that come up on a criminal record check. It goes. And how it wasn’t right and it wasn’t fair that LGB&T people still felt too frightened to report hate crime – three out of four hate crimes still go unreported and what we are going to do to put in the support to encourage reporting. And how it wasn’t right and it wasn’t fair that children, six out of ten children, experience homophobic bullying at school and how we are going to support teachers in tackling this terrible experience which can scar a child for life.

It was a really beautiful day – and I have come home filled with Pride.

PS Huge thanks to the organisers – fantastically well done! 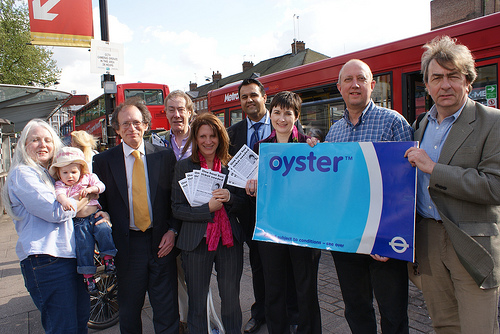 Local Liberal Democrats have expressed outrage at the Mayor of London’s refusal to consider a proposal for a one hour ticket on London’s buses.

The refusal was made clear in a letter to Liberal Democrat London Assembly member Caroline Pidgeon despite a campaign supported by over 2,000 Londoners and all London Assembly Members.

“It’s ridiculous that the Mayor will not even consider the idea of a one hour bus ticket. This is such a brilliant idea and it would have been a great green proposal to back in a bid to help Londoners cut their carbon footprint.

“I’m very disappointed at the Mayor’s disregard for the views and concerns of over 2,000 Londoners and all the London Assembly Members – with that kind of support it should have been given proper consideration but it clearly hasn’t.”

“The Mayor’s response is a hasty, knee jerk reaction that shows he is not prepared to look into a sensible proposal which would help cut congestion and give residents in Haringey and beyond an affordable alternative to using their cars.”

After a successful campaign by Liberal Democrats Lynne Featherstone MP and London Assembly member Caroline Pidgeon to get a one hour ticket on London’s buses, the London Assembly last week unanimously voted in favour of the proposal, ensuring the Mayor of London will have to seriously consider the idea.

The cross-party agreement in the London Assembly for a one-hour ticket contrasted with Labour councillors in Haringey who last week blocked a motion supporting the same idea.

The suggestion, which would enable passengers to use more than one bus during a 60-minute period without paying more than £1.00, would be more affordable and convenient for Londoners who use public transport.

The unanimous vote in the London Assembly on Wednesday came after GLA Member Caroline Pidgeon presented the Mayor with a Liberal Democrat petition signed by 2000 Londoners.

“Travelling from one end of my constituency to the other is not only tricky, but can also get expensive if you use Oyster pay-as-you-go, as you have to change bus at least twice. Having a one-hour bus ticket is a brilliant idea and really makes sense, not least from a green point of view.

“But it is very disappointing that, unlike their Labour colleagues in the London assembly, Haringey Labour can’t put politics aside and support such a sensible, green idea that would really benefit local residents.”

“You can already switch from tube to tube on the same ticket, so it makes real sense to allow people to do the same with buses. It really is unfair that people who use Oyster pay-as-you-go have to pay a new fare every time they change buses.

“One hour bus tickets already operate successfully in Paris, Rome and Brussels. It is now time London caught up and gave bus users a fair deal.”

Started the day campaigning at Alexandra Park Station to bring in Oyster Pay As You Go as soon as possible.

As well as Nigel Scott (our candidate for the by-election in Alexandra ward) and Alexandra Councillors Susan Oatway, Dave Beacham – we also had Caroline Pidgeon who is our Transport Spokesperson on the London Assembly and Denys Robinson Chair of London Region – so it was a big do!

Loads of people took our little petition postcard – so we will be able to keep up pressure on Transport for London (and the Train Operator) who have been a bit tardy with stations north of Finsbury Park in terms of Oyster PAYG. And other Liberal Democrat councillors were out at other stations like Harringay, Hornsey, Bowes Park etc. Onward and upward.

Then visited a delightful supported housing scheme in Wood Green – Raj Kunj – for residents of Asian community. They were so nice and raised lots and lots of issues – chief amongst which is the very short time the lights at the crossing outside their building allows them to get across the main road. Traffic comes whizzing down the main road – very dangerous I think.

Well – what to make of the results of the party’s selection of our GLA (London Assembly) list candidates for next year?

This time round I wasn’t standing (I finished third and top in the selections for 2000 and 2004, but stood down from the GLA when I became an MP), so it’s been interesting to see the process from the outside.

I’m glad that the overall list is so well balanced in terms of men and women – good progress there – and with a good mix of people used to taking on not just the Tories but also Labour! It is also clear that those who (like myself previously!) started their selection campaigns well in advance of the process officially starting generally did well – Jeremy Ambache and Caroline Pidgeon particularly. Good to see hard work and campaigning bringing benefits.

Is it all good news then? Well with nine out of the eleven being white, there’s bound to be some talk about the ethnic make-up of the list. There was a good range of candidates to choose from, so I hope those who weren’t successful at getting on this list this time treat the result as a stepping stone to the future rather than as a permanent rebuff.

Finally, congrats to Monica for getting on the list, and best of luck to Wayne and Ajmal – the other two candidates from Haringey – for other selections.

… and off I go to Surrey Quays for a to meet a woman with a double buggy and the Lib Dem Deputy Leader of Southwark Council, Caroline Pidgeon.

The story is that bus drivers have discretion as to whether they let double buggies on unfolded or not. Now if you have two young babies/toddlers in a double buggy, how on earth are you supposed to get them out, keep them safe, fold the buggy and get all of that on the bus? It seemed this lady kept meeting bus drivers who exercised their discretion by driving off! Not good enough.

It was absolutely bucketing down and having fought my way from Highgate on the tube, I was not in high spirits. I got there early, rang a friend on my mobile and then when I came off the phone a message came through that the mother had rung Caroline to say one of the babies was ill and she couldn’t come. It happens – but not a great start to December!