As you may have heard on the news, an ongoing dispute between the Mayor of London and RMT /TSSA Unions has led to a tube strike starting this evening at 9:30pm.

In my experience, tube strikes also affect buses, trains and roads as people use alternative transport for their commute.

The strike will start at 9.30pm today until the morning of Friday 7th. Another strike is planned between 11th – 14th as well, depending on further developments.

There are a number of tools you can use to plan an alternative route, including TFL Journey Planner and Google Maps. TFL has also released an advice document, outlining which lines will be affected, here.

In the meantime, please do not hesitate to get in touch via email, phone, or post if I can be of any other assistance as your MP.

Local residents will not be able to use the Northern Line from local stations in Highgate, Archway and Finchley at weekends until December 2011 after tube operator, Tubelines, announced 82 weeks of weekend closures, starting on 27 March 2010.

The Liberal Democrats have launched a petition against the closures, saying that they will affect residents travelling into central London and will also have a detrimental effect on local traders in Highgate High Street and Archway, who rely on shoppers travelling in on the tube.

Liberal Democrats on the Greater London Authority (GLA), concerned that the issue has turned into a fight between a Tory Mayor and a Labour Government, rather than focusing on the needs of Londoners, have launched a five-point plan to ensure a better upgrade of the Northern Line, without the mass suspensions currently planned.

“Local residents rely on the Northern line to get around at weekends. Twenty months of suspensions just increases the misery faced by travellers on the ‘Misery Line’.”

“We all want a better Northern Line, but not when local residents have to put up with 82 weeks of weekend closures.

“Many local traders in Highgate and Archway rely on trade coming from tube users. It is unfair for these businesses, already feeling the pinch due to the economic situation, to bear the brunt of these closures.

“I hope that local residents and traders alike will support our fight against the closures and the Liberal Democrats’ five point plan to a smoother upgrade of the Northern Line.” 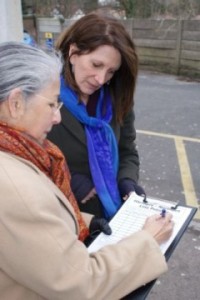 To help raise awareness of the proposed 82 weeks of evening and weekend closures on the Northern Line and to gain further support for their campaign Liberal Democrats have been out collecting petition signatures around Highgate Station.

Local Liberal Democrats are concerned that local traders and residents will bare the brunt of the disruption caused by the 82 week plan, which is due to start on the 27th March.

The Hornsey and Wood Green MP has written to Transport for London (TfL) and Tubelines, urging them to consider an alternative five-point plan put forward by Liberal Democrats on the Greater London Authority which seeks to reduce the effect on local residents and traders.

Any Northern line user who wants to sign the petition should either go to http://campaigns.libdems.org.uk/northernline or call Lynne Featherstone’s office for a hard copy of the petition.

“We all want to see an upgraded Northern Line but the current plans will make residents suffer for almost a year and a half as the upgrade work is carried out on the Northern line – this is frankly absurd.

“It’s good to see that local residents share our concerns about how disruptive these works will be, and are keen to seen a less painful solution. By putting a strong case for a fairer upgrade deal to the people in charge I am hopeful we can get a better solution.”

“I’m really worried that local traders in Highgate and Archway will suffer if their weekend trade is continually disrupted like this.

“From chatting to local Northern line users, it’s clear that a deal that doesn’t prolong the pain is preferable. Please take a minute to sign the petition and back our campaign.”

When I heard the magnitude of the scale of the closures that Tubelines want during their upgrade of the Northern Line I thought they must be taking the you know what!

Sixteen months of early evening closures and something like 83 weekends – and we are talking major closures – either the whole caboodle and/or north of Stockwell. They must be bloody mad!

I could say ‘I told you so’ – ‘cos I did – endlessly when Labour forced the PPP (private public partnership) on us for the tube. The contract is a nightmare – and now we in North London (and the other end of the Northern line obviously) are about to be tortured endlessly by this dreadful arrangement.

Boris has woken up late – as usual – hope someone is checking what he said about the PPP! As Mayor he is now saying let’s change the contract to another private company. That would be out of the frying pan into the fire AND would cost a fortune to get out of the existing contract I bet. The shareholders wanting a slice is much of the current problem and definitely a huge whack of the ginormous price tag of £6 billion that Tubelines are asking for.

£6billion! It could be done for £4 billion I am sure – if the  shareholders and profiteers were not guaranteed under the PPP contract their rake off before the work even begins.

No – our best bet – is for Tubelines to want out of the contract themselves. Then LU / TfL who already had to rescue Metronet when they went under (the other private public partnership) to take over. Blimey – just when you think it can’t get worse – it does.

Having been Chair of Transport in London for nearly five years when I was on the London Assembly – and knowing a little bit about engineering and repairs as a consequence – I am sure that Tubelines have asked for way more closures than they need. The reason – well they would get charged a penalty probably if they over ran their agreed closure time – and so rather than risk penalties – I bet they have asked for loads more time in closures then is actually needed.

So – I have got my fingers crossed – just hoping that Tubelines want to get out of the kitchen!