I went yesterday to give the oration at the planting of a Wild Cherry Tree in memory of Joan Schwitzer who was a historian and Founder Member of the Hornsey Historical Society and of the Friends of Hornsey Church Tower.

I had met Mat Schwitzer only recently when my office told me that I had to go to his house for a ‘chat’. All I can say is that we had a very pleasant half an hour philosophical discussion over a whole range of issues – and that whilst Mr Schwitzer may be old – he is very, very charming and persuasive. Hence I found myself in St Mary Churchyard giving the oration!

And I was really delighted and honoured to be able to do so – as Joan was an exceptional women who was part of the Big Society long before David Cameron was born. I paste below the oration – albeit that in speaking it was not precisely as written.

Joan’s family were all there – and with a loving husband of 62 years, Mat, four children, six grandchildren and aunts, uncles and cousins – their presence and the planting of a tree in her memory was a very fitting and very fine tribute to an outstanding woman and member of our local community.

– Of course Mat is a complete charmer – as you can see by my being here today, and as I sat in his front room which was Joan’s front room and the family house for decades it was clear to me that here had lived, not only a happy family and a couple whose relationship had been longlasting – but a woman who acted on her convictions that what you do and how you are in life matters

– She continued to the end of her life to be interested and concerned and active on issues important to her. She and I were in communication over Trident in the year before she died. It’s not a huge success – but since then although we have not managed to scrap Trident the decision to renew is at least kicked back for five years.

– Joan and Mat’s grandson Edward did work experience in my office in the summer of 2008 – and earlier this year I was judging a debateing competition and one of the competitors came up to me in a break and said he had done work experience for me – it was of course – Edward.

– Who went on to win the London national and international conpetitions and presented with silver mace by ironically Charles Kennedy after the final in Glasgow .

– Only this week, I went to give the prize to the winner of my xmas card competition where local primary school children paint a card and one becomes my Christmas card.

– And I met the winner, amazing name, Zoom Rockerman and his parents – and his mother is helping at the Hornsey Historical Society and I mentioned that I was doing this today – and she just went into a tribute to Joan – to her work for the society – to her as a person

– The love, respect and warmth for Joan is the real tribute to her life – a life well lived. Clearly an exceptional woman – with an independent mind. She was the embodiment of what the world needs now – a parent who loves their family, bring them up with encouragement to be who they want to be – but have that outward looking perspective too – that what goes on in the world matters and that it is all of our responsibility to make the world work and to make the world a better place.

– She taught at St Michael’s school, helping with special needs children – and I grew up next door to St Michaels in a block of flats called Highpoint. And whilst today they are regarded as quite posh – historically speaking – they were developed as worker flats for the Gestetner company staff. Designed by Lubetkin and if you ever go around the back identical to the penguin pool at London Zoo – designed by the same famous modernist architect. I wish Joan had written a history of that block too.

– She was of course, passionate about local history and indeed wrote a history of st Michaels School itself.

– And then of course – there is the Hornsey Historical Society – that I referred to before. In its founding she planted an acorn – and needless to say – that is today a sturdy oak tree.

– The British Association for Local History presented Joan with an award for personal achievement.

We all gained immensely from her change of direction to local history. Joan Schwitzer served as chairman from 1974 to 1985 during which time she used her abilities, enthusiasm and energy to make the society an active force in the borough and in local history circles. As one of her referees has written, Joan had the vision to see that in order for the Society to play a significant role it needed to have both a regular publication and its own premises. Another comment labels the latter as ‘her greatest achievement’. In the face of considerable opposition, she used her negotiating skills and her diplomacy to seize the opportunity to lease (at a peppercorn rent) from the local council a small redundant nineteenth century school building, then serving as a bus shelter. After organising and encouraging other members to fund-raise and volunteer in other ways, the Old Schoolhouse in Tottenham Lane has become a centre for the Society, for housing exhibitions, archives, publications storage, a shop, local history evening classes and oral history sessions.

I could go on as there is a mountain of praise for Joan from many quarters. But I want to look at her life from my perspective for a moment – I am Minister for Equalities – and Joan’s life is a truly inspiring message for women today. It was a different era – but she was clearly an environmentalist – composting long before most people even heard of the word and using a bicycle as her preferred mode of transport. She was passionate about world issues – nuclear energy and  nuclear weapons.

But it was, from what I have learned about Joan’s life, her commitment to community, to causes that was so deeply ingrained as part of her being that seems to have been a mission in her life.

Joan was a pioneer of the early days of oral histories and there is a sizeable bank of recorded interviews that are a resource for historians today – and are part of the archives collection at the Old Schoolhouse today.

In this current climate, where there will be hardship and loss, it is that sense of something beyond our own four walls to which we can contribute – something outside of our own situations – that perhaps is the positive that we can hang on to.

We in Haringey and Hornsey have always had community. There are many many good people who strive and work and volunteer to make life better for others around them – who fight for causes against the odds, who believe in a society where people are the most important asset on this earth – and buildings – of course!
Joan Schwitzer was clearly an outstanding member of our community who led by example, shared her enthusiasms and gave so much to us.We are grateful for her life so well lived.

62 years together – Mat and Joan. I am not sure how one bears the loss of a beloved partner after that length of time together – but it is the price you pay for having a lifelong love – a price worth paying.

To Mat and to the children and grandchildren family and friends – whilst you must all miss Joan terribly – you can be very proud of the woman she was. 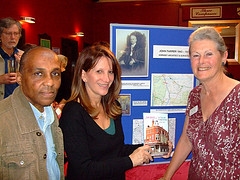 The pub (The Three Compasses on Hornsey High Street) where I have my constituency office upstairs was designed by the famous architect John Farrer – hence local references Farrer Road, Farrer Mews etc). Last week – the Hornsey Historical Society launched a new book by one of its members, Janet Owen, ‘John Farrer – The Man who changed Hornsey’ in the Three Compasses – because the pub itself was designed by John Farrer and adorns the front cover!

John Farrer’s work is evident in many parts of Hornsey and his contibution to its development from the 1880’s into the 1920’s was hugely significant. For anyone interested in local history and architecture – it’s a must! Contact the Hornsey Historical Society for where to get a copy.