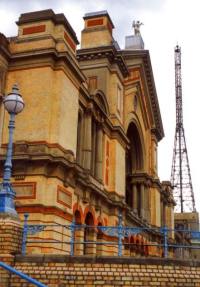 Here’s my latest column for the Highgate Handbook and Muswell Hill Flyer:

Beautiful building, fantastic location – but a financial nightmare. That’s been the history of Alexandra Palace over the last few decades as one bungle after another has seen tens of millions of pounds wasted – with the bill for clearing these losses landed on the Haringey Council Tax payer.

Over the last couple of years we’ve seen Haringey Labour desperately trying to wash their hands of the problem – but wanting to do so by selling off much of the site on a mammoth 125 year lease to a private developer. A deal was sort-of struck with Firoka, which has since fallen through – leaving Haringey facing a £6.2 million claim from Firoka.

Liberal Democrat councillors have repeatedly criticised this deal – the way in which it was rushed through, the lack of decent public consultation, the lack of proper safeguards in the deal (especially for the historic TV studios) – and the failure to sort out crucial details.

Following the collapse of the deal, there have been two independent investigations – both with damning conclusions about how Labour councillors have behaved. The second one – known as Walklate 2 – concludes that “entering into and maintaining the licence [with Firoka for them to take over Alexandra Palace] has led to losses to the Trust in the region of £1,500,000. The Trustees were not given financial information of the effect of the licence … nor were they given the opportunity to consider whether they wished to revoke the licence.” That is £1.5 million in losses in addition to the £6.2 million claim.

As the reports have shown, the Trustees of Alexandra Palace were kept in the dark about major parts of the deal, they were not told of the concerns raised by some staff and they were not told key financial information either. In other words – there was such a drive to try to get Ally Pally off Haringey’s hands that things were rushed, kept secret and done badly.

The report also concludes that, “There is a moral imperative on any senior management team, particularly in the public sector, to take collective responsibility for such matter and this simply did not happen.” Mistakes, losses – but no-one carries the can other than the rest of us – who have to pick up the pieces through our Council Tax bills.

You just wonder when this pantomime of hideous errors and misdeeds will end; when we the taxpayers will stop having to foot the bill for incompetence and possibly worse and when our beloved Ally Pally will be free of the smell of things not quite right. Next local elections perhaps?

If you missed it before, you can still watch my short YouTube film about Ally Pally.

0 thoughts on “What's going on at Alexandra Palace?”