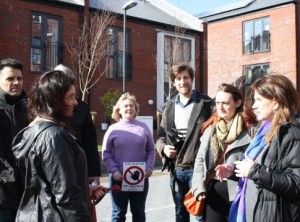 Lynne Featherstone MP last week met with Transport for London at City Hall, to discuss the ongoing issues with the Ringslade Road rat-run. The local MP was joined by the leader of the Liberal Democrat group on the London Assembly, Caroline Pidgeon, to argue the local residents’ case together.

Residents on the small Ringslade Road currently have to put up with over 3,000 vehicles using their road everyday – making it noisy and unsafe. They would like to see the road closed.

Haringey Council representatives were invited to attend the meeting, but declined the invitation to do so. The final decision on what to do with the road is down to Haringey Council.

“Residents in Ringslade Road have been living with the problems caused by this rat run for too long. Yet Haringey Council has refused to listen, and has always tried to shift the blame onto TfL for the lack of action.

“Now we have met with TfL – we know that they are open to change, and will carry out traffic modelling to find a way forward.

“The final decision on what action to take rests with Haringey Council. I very much hope they finally listen to residents, and work with TfL to find a suitable solution.”