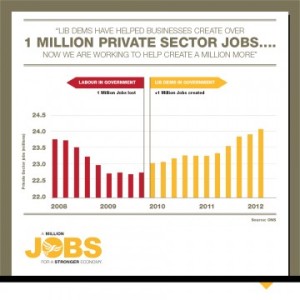 Lynne Featherstone MP has today welcomed news that unemployment in her constituency has fallen again.

In Hornsey and Wood Green, unemployment is currently at a low of 4%, meaning there are now 869 less people claiming Job Seekers Allowance than when Labour left the Government in 2010.

This comes alongside news that, nationally, the number of people in work reached a record high of 29.87 million in the quarter, up 155,000.

“Work is so important to individuals and families. It pays the bills, gives us purpose and fulfilment, and provides security for our long term futures.

“This fall in the number of people claiming JSA is a welcome sign – particularly in Hornsey and Wood Green! This drop, combined with the rise in the total number of people in employment, shows that our economy is recovering and people are returning to work.

“In Government and locally the Lib Dems will keep working hard to reduce unemployment, which in turn will help build a stronger economy and create a fairer society – enabling everyone to get on in life.”

1 thought on “Unemployment in Hornsey and Wood Green falls again!”