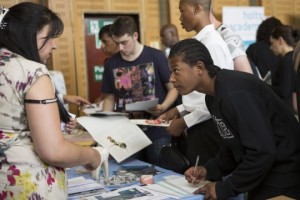 Lynne Featherstone MP has welcomed news that unemployment in her constituency has halved since 2010.

The Liberal Democrats in Government have helped businesses create over 1 million new jobs since 2010, and are working to create a million more. A record number of apprentices have also been created, with over 2 million people starting an apprenticeship since 2010.

Figures released by the Office of National Statistics (ONS) show that the rate of employment is at a record high of 30.8m.

“The recession was really tough – affecting millions of people across the UK. So, when the Lib Dems entered Government, we worked hard to get things back on track. It’s the job of MPs to work with businesses and JobCentres, and help get people into work – and that’s what we did from day one.

“Now, employment is at a record high. It means there are so many more jobs and apprenticeships available, giving everyone the opportunity to find work and get on in life.

“And I’m so pleased that unemployment in my constituency has halved.  Over 100 young people attended the apprenticeship event I organised with JobCentre Plus last year – many of them securing places as a result. As the local MP, I’ll continue to hold these events and promote local businesses.”