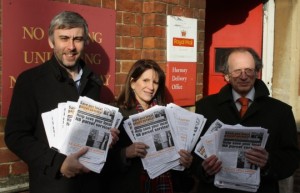 Royal Mail closed the office – which was also a parcel collection point – in September, despite a campaign led by Lynne Featherstone MP, which had the support of over 1000 local residents. The new Royal Mail sorting office and collection point is located in N19.

Following the closure, Royal Mail promised the local MP and local residents that a new free re-delivery service would start, which would mean residents would still receive parcels without having to pay extra, or travel to N19 to pick it up.

However, residents are not satisfied with the replacement service, with dozens reporting delays and errors with the service.

During the meeting, Royal Mail refused the request to install a free, local collection point – but they did commit to investigating all the complaints and acting on them to improve the service they provide.

“The closure of the local sorting office was a huge blow. Residents and I worked together for two years to hold off the closure, but eventually the service was relocated by Royal Mail.

“And if the complaints I’ve received by my constituents are anything to go by, the Royal Mail redelivery scheme clearly isn’t working as it’s supposed to. Residents are having to pay more for redelivery, or make the long journey to the Bush Industrial Estate to get their parcels.

“This is not convenient for elderly or disabled people, those with small children, or people with limited free time. I will forward all the complaints and keep pushing Royal Mail to improve services, particularly in run up to Christmas.”