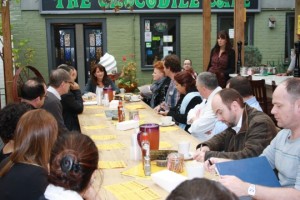 Lynne Featherstone MP last week met with over 20 local retailers, who have suffered a loss in trade of up to 60% due to Labour-run Haringey Council’s poorly planned road works.

The traders had little notice of the works, and are very dissatisfied with the way the works have been managed.

They asked the MP for Hornsey and Wood Green to help them with their demand for two months’ business rate refund from Haringey Council.

When the works began, the Lib Dem MP contacted Transport for London (TfL) bosses. TfL stated: ‘the Borough is the local Highway Authority and is therefore responsible for either promoting or coordinating this work,’ and suggested that the local MP contacted Haringey Council for an explanation.

The MP for Hornsey and Wood Green has arranged a meeting with the Haringey Council Chief Executive this Friday, where she will raise the traders’ concerns and business rates refund request.

“These road works have caused misery for residents, commuters, bus users and traders. Haringey Council gave minimal notice, they did not consult, and they chose the worst time of year to undergo these works.

“As a result, our local shops are seeing up to 60% losses in trade – and it just isn’t fair.

“Local Lib Dem action has already secured extra bus services from TfL. We’re also calling for free High Street parking between now and Christmas to help boost trade. On Friday, I’ll be meeting with the Chief Executive of Haringey Council, to pass on the traders request for a business rate refund.”