Well – it’s been quite a stunning week.

Last Saturday we (Department of International Development) held a Youth for Change event on Female Genital Mutilation (FGM) and Child Early and Forced marriage (CEFM). Young people came and took over DFID for the day.

And then on Tuesday – we had the Girl Summit 2014 – which brought leaders, activists and campaigners from all over the world to unite in the fight against FGM and CEFM.

At the Youth for Change event – which I hope you read about in the papers – there was an amazing program ranging from mentoring sessions for young people to TedX talks! At the end of the day – the Youth Advisory Panel (who had been instrumental in designing the day) did a wonderful performance demonstrating how life is now for many girls across the world – and how it can change!

And you will notice in the photos – that there are quite a few boys involved. This is all of our business and men and boys have a role and responsibility. And it was fantastic at the end of the day when Nick Clegg and I sat and talked with the Youth Panel to hear boys talking about these issues openly – no embarassment and no hesitation. The world really can change – and it is young people who are the agents of change. 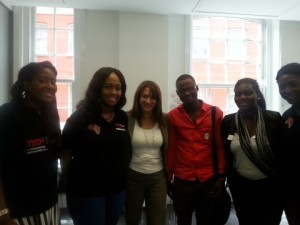 The Girl Summit 2014 itself – saw the Prime Minister, Deputy Prime Minister, Secretaries of State for Home Office and DFID all take to the plenary stage to demonstrate the commitment of the UK government to eradicating FGM and CEFM within a generation – and I hope that message rang out loud and clear across the country – and indeed the whole world.

I am particularly proud of the announcement Nick Clegg championed and made on the day – that all frontline professionals working in the public sector will have compulsory training on FGM. This has been such a missing link on tackling FGM in our country. Tippy toeing around cultural eggshells inhibited addressing this issue for far too long – and even now – it is a sensitive issue – and frontline workers (teachers, health workers, police and social workers) need to feel confident so that they can intervene to detect a child at risk at the earliest stage – and hopefully prevent FGM from taking place. This now will happen.

There were speeches and dancing. There were panels and questions. There were round tables and spotlight sessions. But of all who took part – my special praise goes to those brave girls and women campaigners – who have been cut and who have spoken out to break the silence so that girls in the future will not go through what they went through.

It is these girls’ and women’s life stories and life efforts that were the catalyst for FGM and CEFM now being top of the political agenda.

To all the girls and women – who educated me and made me take this on as a mission – I thank and salute you.