Here’s an article I wrote following Lib Dem conference in Glasgow last week. You can also read it in the Ham and High here.

It’s party conference season, and this year the Liberal Democrats met north of the border in Glasgow. Along with my colleagues from Haringey, I participated in the many debates and events that make conference what it is.

Unlike the other parties, the Lib Dems use our conference to give members a say in our policies. Local parties can bring forward ideas and motions, which are debated and voted on. It can be a very lively affair, with strong views on both sides!

But once passed, these ideas can go on to form our party policy. When I became a Home Office minister, I took a conference motion on equal marriage, and – with a huge amount of help from other MPs, activists and supporters – turned it into UK law. 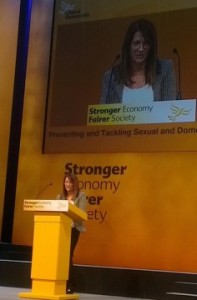 This year I contributed to a motion on preventing domestic and sexual violence against women. It’s an area I have been working hard on since entering government – in the Home Office and now in the Department of International Development.

During the debate, I spoke about the government’s work on tackling female genital mutilation (FGM) at home and abroad. It’s so important that any party policy on tackling gender based violence recognises the devastating effects of FGM – and commits to preventing it and supporting the victims.

I also took part in fringe events with Amnesty and Oxfam. These events are based on specific issues, where ministers and organisations can discuss the way forward with party members.

At Amnesty, the focus was on how to change perceptions and attitudes to promote women’s rights in the future. We discussed ways to empower women economically, and also how to educate men and boys in women’s rights.

At Oxfam the focus was on food, and how to ensure that there is enough food for everyone in a changing climate which could cause more natural disasters.

Ministerial work was not the only thing on my agenda. Such a wide range of topics are discussed at conference, and I also took part in a fringe event looking into the housing crisis in London.

Along with the Lib Dem minister for communities and chair of the National Housing Federation, I discussed ways we could address the current problem of having too little social housing. In Haringey we have a chronic problem – nearly 20,000 individuals and families on the waiting list for properties which do not exist. 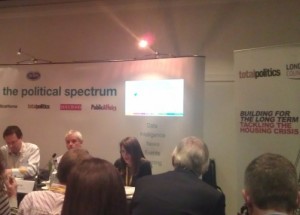 Building more is obviously necessary – but in the short term we also discussed bringing empty homes back into use and encouraging home swapping within local boroughs, to try and ease the problems of overcrowding.

Unfortunately, our local Labour-run Haringey Council is failing miserably to address the problem – having not built any new homes in 25 years, overseeing nearly 2,000 empty properties and not holding any home swap events. But I will certainly be taking some of the ideas from the fringe event and pushing them to act.

All in all it was a fantastic five days, full of what the Lib Dems do best – debate, democracy and action – and I am already looking forward to next year’s conference!