The fire at the Somali Bravanese Centre on Coppetts Road two weeks ago has been shocking for the whole community. It has now been confirmed as an act of arson by the Police and it is hard to comprehend what goes through the mind of someone prepared to risk the lives of others in an act like this.

Last Friday I met with members of the Somali Bravanese community following the fire so that I could express my sadness but, more so, to offer my help. It was an opportunity for me to listen to their concerns and find out what can be done. 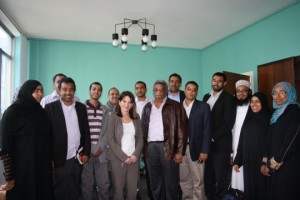 Two weeks on, the leaders of the centre are determined – determined to move forwards, to rebuild, to reunite the community and come back stronger than before. The group spoke to me of the history of the Bravanese people and it is clear that they have a long tradition of carrying on, even in the face of adversity and I feel that this situation – though challenging – will prove no different.

The leader of the centre explained to me that their most pressing concern at the moment is finding a temporary location and equipping an office so that they can get back to work. A number of Somali Bravanese children and teenagers used the centre and it is vital that they have somewhere to go while the current building is out of action.

We also discussed what needs to be done in terms of getting the centre rebuilt as quickly as possible and I have written to Barnet Council in order to highlight some of the concerns raised. I will continue to offer my help in whatever way I can.

In the meantime, support from local residents has been overwhelming – I have received numerous emails asking me what can be done to help and I know those from the centre have received many more. It just shows how united the community is – if anything, now more than ever.