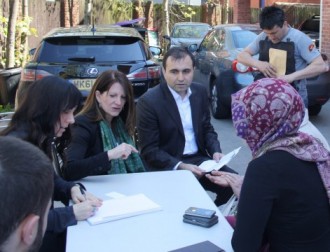 Local MP Lynne Featherstone last week visited Fatih Mosque, a branch of Suleymaniye, in Wood Green to talk to members of the congregation about local issues.

The Liberal Democrat MP entered the Mosque after prayers and was given a tour of the Women’s area. Following the tour, the MP for Hornsey and Wood Green sat outside the Mosque and met with members of the congregation.

Along with two of her caseworkers, the MP spoke to dozens of people, and offered them assistance with their local issues.

Lynne Featherstone and her team process around 400 pieces of casework on behalf of local residents per week.

“I would like to thank Turhan for organising this event, and thank the congregation for welcoming me to the Mosque. It was great to take advantage of the nice weather and hold an advice surgery outside.

“My team and I spoke with dozens of people and gave them advice on their local issues. We will be making numerous representations to the Council and other authorities on their behalf this week.

“I hope this will be the first of many advice surgeries at the local Mosques in my constituency.”