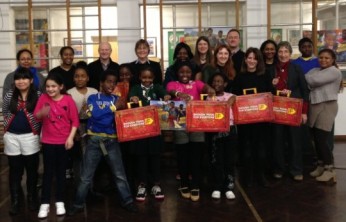 The event is part of the ‘Enough Food for All – If’ campaign – which aims to visualise the unfair distribution of food around the world.

The MP for Hornsey and Wood Green opened the banquet by speaking about the role of UK aid in combating hunger.

The Liberal Democrat MP – who is also a minister in the Department of International Development – spoke further about her recent visits to Ethiopia and South Sudan, where she witnessed the effects of uneven distribution of food and hunger.

The attendees then ate different meals, depending on whether they had drawn a rich, middle or poor ticket. The rich received the best meal, the poor ate only a modest portion of rice, and the middle-class got a slightly better menu.

“I’d like to thank Katrina for organising this fantastic local event, which was a great way of illustrating some of the issues faced by the world’s poorest. It was a pleasure to take part and speak at the event.

“I was very happy yesterday when the Chancellor reaffirmed our commitment to spend 0.7% of GDP on overseas aid – so we can continue to help the world’s poorest and contribute to ending hunger in the developing world.”