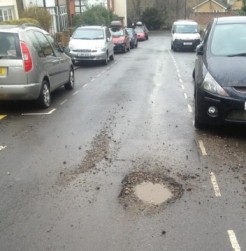 Hornsey and Wood Green MP Lynne Featherstone wrote an urgent email to Haringey Council on Friday, after a local resident alerted her to a dangerous pothole on Lightfoot Road – the same road on which a man previously tripped on a pothole and suffered brain damage.

Last week, Haringey Council were ordered to pay £1 million in compensation to Kyle Bullock, who tripped on a three inch deep, fifteen inch wide pothole on Lightfoot Road in 2007. He spent four months in hospital and suffered a severe brain injury.

After the court judgement, the Council issued a statement saying it had: ‘introduced a comprehensive maintenance programme to prevent such accidents happening again.’

Despite these assurances, however, another local resident later tweeted a picture of a current large and dangerous pothole on Lightfoot Road.

“This is an absolute disgrace. A man was seriously injured and Haringey Council were forced to pay out £1million in compensation, yet they still leave gaping potholes unaddressed on the same road.

“It is insulting to tell residents that their maintenance programme will prevent accidents happening again, whilst the danger still remains.

“Haringey residents pay one of the highest Council Tax rates in London. The least we deserve in return is safe roads and pavements.

“In Haringey, we are unfortunately used to being let down by the Labour-run Council. Local residents deserve better.”