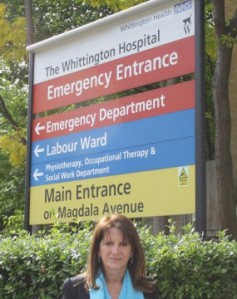 Haringey Liberal Democrats and Lynne Featherstone MP have launched a petition calling on Whittington chiefs to ensure that no hospital services are lost – and no land sold off – without equal or better local replacement services being put in place.

The plans to sell off land and relocate six hospital buildings were confirmed at a meeting of the hospital’s Board and announced shortly after.

The MP and Haringey Lib Dems immediately raised their concerns about the plans. Lynne Featherstone MP had an urgent telephone conversation with Chief Executive Yi Mien Koh, and yesterday met with other MPs and Whittington Board members.

Alongside calling for guarantees that no services will be lost without equal or better local replacement services in place, Lynne Featherstone MP and the Haringey Lib Dems are also calling for a proper public consultation on the Board’s proposed changes.

“Residents will rightly be concerned that we could see a repeat of what happened at Chase Farm, where services were lost with no replacement.

“The Whittington should consult local people before any changes are made or any buildings sold-off. They must also ensure that replacement services will be in place first before they can even consider selling the buildings, it can’t be an after-thought.”

“I actively oppose any land sell off or loss of hospital service without an equal or better replacement being provided to local residents.

“The Haringey Lib Dems and I have launched this petition to ensure that residents’ views are taken into account, and so the Board know the strength of feeling on this issue.

“I encourage anyone who wants to ensure no services are lost to sign the petition, and encourage their friends, family and neighbours to do the same”