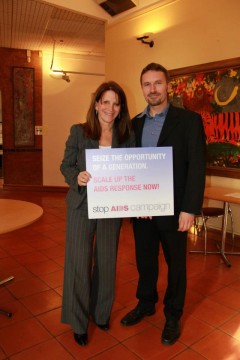 Last week I spoke at the AIDS Consortium’s Faith and Criminalisation AGM.

I was happy to join the distinguished panel, and to emphasise the UK’s continued commitment to HIV treatment and prevention.

This is something I feel very strongly about not just because I, like many in the early days, lost several personal friends to AIDS but also because it is now possible to live with HIV and AIDS and yet there are still so many people who could be helped who are not yet being helped.

About six years ago I visited Johannesburg to see for myself the work going on there to encourage people to come forward, to encourage treatment and to remove the stigma At that time most of the work was being done by corporates who were establishing great health facilities to keep their workers healthy at a point when the Government was not engaged. Thankfully that is no longer the case.

Now I have moved portfolio to DFID and HIV and AIDS (along with malaria and TB) are in my remit. Hence my visit to the AIDS Consortium to make clear that the Coalition Government is committed to this agenda

The Government is also committed to ending discrimination on the basis of sexuality. I believe that the world as whole must work harder to empower these key populations whose life circumstances place them under increased risk of HIV. Faith based organisations play a vital role here – and I look forward to working with them during my time at the Department for International Development.

Read more about it here