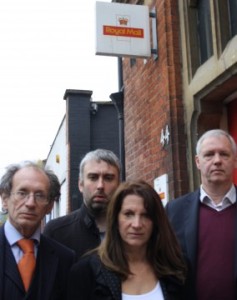 The Liberal Democrat MP for Hornsey and Wood argued strongly against current reorganisation plans, which would make it harder for residents to collect their parcels and registered post. The MP also pushed for local collection points to be retained in the N8 area, and across the borough.

The N6 and N4 area will also be affected, with the services at the current offices in Holloway and at the Harringay Arena being relocated to an industrial estate in Upper Holloway.The plans, which affect 25,293 addresses, include the closure of the Hornsey office on Tottenham Lane. This office, which serves the entire N8 area, will be moved to Holloway. As a result, residents will have to make longer and more expensive journeys to collect their undelivered parcels.

Following the announcement, Lynne Featherstone and the Haringey Liberal Democrats launched a petition to save the local sorting offices and services. Over 1000 residents have already registered their support for the campaign.

“It is unacceptable that Royal Mail expect N8 and N4 residents to travel all the way to Holloway to collect parcels.  Residents are seriously unhappy and over 1,000 have already signed our petitions.

“Royal Mail should listen to its customers and continue to provide and free and convenient local collection points, if it wants people to keep sending parcels through its service.”

“This issue is incredibly important to local residents. If the current plans go ahead, there will certainly be more losers than winners. It is vital that Royal Mail takes another look at these unfeasible plans.

“The Haringey Liberal Democrats and I are fighting hard to save the sorting offices and keep services truly local. I encourage all residents to sign the petitions, to show royal mail the strength of feeling on this issue.”

You can join the hundreds of people who have already signed the Hornsey sorting office petition by visiting: http://campaigns.libdems.org.uk/parcelhornsey

Or if you use the Green Lanes delivery office, you can sign this petition: http://campaigns.libdems.org.uk/parcelgreenlanes