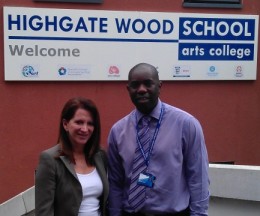 Lynne Featherstone, Liberal Democrat Member of Parliament for Hornsey and Wood Green, is urging local schools to share their experiences with the Pupil Premium funding given to schools by the coalition government.

Lynne Featherstone has written to schools in the area asking how they spent the Pupil Premium funding – calculated as £8.8 million for Haringey schools. She has also asked schools that ran summer schools under a related government scheme what their experiences have been.

“I have heard from a number of local schools already. The Pupil Premium has been spent on increased pastoral support and in direct efforts to raise boys’ attainment; extra staff have been recruited to work on literacy and numeracy; Alexandra Park School has boosted its hardship fund and set up a youth group. One school in Wood Green plans to take on a careers advisor as part of its package of measures while another high school in the area has invested in providing literacy boosters for children entering the school with lower attainment levels.

“All of this sounds like great news but I want the full picture from all local schools.”

“The Pupil Premium is a powerful tool. The funding is linked to the child so people from poorer backgrounds are helped even if they live surrounded by relative affluence. And schools are free to spend the money as they think works best making it doubly flexible. It should make a real difference to local children.”

Lynne Featherstone and Haringey Liberal Democrats plan to publish a report sharing the experiences of local schools with the Pupil Premium later in the autumn.