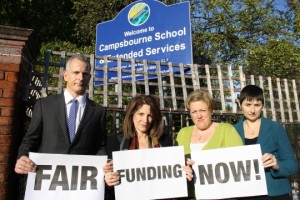 The mayoral candidate joined the fight for better school funding as the second leg in a consultation to simplify the school funding system came to a close on 11th October. This round of consultation has seen an even stronger backing by residents, with close to 130 local people, teachers and schools making personal submissions to the consultation.

In addition to fighting for local schools to get fairer funding in a new funding formula, Liberal Democrats are already delivering more funding for local schools, through the pupil premium. It was last week announced that this year, schools will get close to £500 per deprived pupil, an increase on the £430 promised earlier in the year, adding up to an extra £2.2 million for schools in Hornsey and Wood Green. For the Borough, that adds up to a boost of £5.3 million this school year alone.

“I’m delighted to have such a strong backing in the battle for fair funding, both from Brian and his team and from local residents who really have come out in force to respond to the consultation. Thank you all.

“I am sure that this strong support will make a world of difference and hopefully tip the balance in favour of our children.

“But local schools are already reaping the benefits of Liberal Democrats in government, by getting an extra £5.3 million to support deprived pupils this year alone. I’m proud to see us delivering for local schools already and I look forward to hearing the outcome of this consultation in the next few months.”

“I was appalled to hear of the long-standing unfairness in the way Haringey schools have been funded over the years.

“But it’s great to see the new government taking strong action to simplify the school funding system and looking specifically at the case of Haringey. I am 100 per cent behind Lynne in her long-running battle for this injustice to end. Give Haringey’s children fair funding now!”