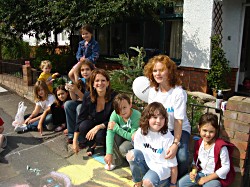 Sometimes you just see such a good idea you think why doesn’t everyone do it. I have been to summer street parties – many times. And they are always enjoyable, great for community spirit and sometimes for charity too. But today I went to Greenham Road to open their street party with a difference.

Sarah Prince had an idea. Then she got her chums (all women) out for a drink – and then they thought it was a good idea. Then she got WaterAid involved and everyone in the street and bob was your uncle (after a lot of hard work).

Basically the children all get to make chalk pictures on the pavements outside their houses – and with the food and the games and the events the street hopes to raise £5,000 and Sarah got WaterAid to promise to match the funds the street raised. The money will go to a project which will bring a well to a village in Uganda where the children or the mothers walk for hours and hours to fetch water – and water which more often than not is likely to make them ill. This project will make an enormous difference – an unbelievable difference to them.

Having selfishly been gazing at my brown lawn in the July heat wave during the hosepipe ban, how unimportant that seems set against what is needed elsewhere in the world. Couldn’t help thinking that linking street parties with a worthy project is a good way to go. And what was really great is that the children were really involved – could chalk to their hearts content – and the rain will clear it all away eventually. Full marks to Sarah!