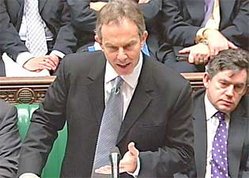 Prime Minister’s Questions – the bear pit of Parliament. What to say? I could just get sniffy and say what a load of rubbish and it has no bearing on the real world or indeed, the success of the party. William Hague was tip top at PMQs – but a flop everywhere else and as Conservative Leader. But this is the arena where the media get their kicks. They just love it – this macho test of testosterone. And as the media love it – this is the bit that gets the most coverage of all we do in Parliament – and so for many people “Parliament” pretty much equals PMQs.

So although it can make good entertainment, I doubt it helps politics (reputation and practice of) much. I have to say – when Blair is in full flow and horns are locked with the opposition – it does have that same excitement as a bull ring (not that I’ve ever been) or a heavyweight-boxing match (to which I have been and am totally ashamed of my liking for it).

However, after the general excitement and blood lust has worn off, I am now left totally unmoved by the theatrics. It has lost the thrill of the new – and when you hear Blair’s mantra – the mantra he uses in response to almost any question is to talk about £x being put into y public services, with a few other statistics thrown in, and he says we’re on the side of the clichés – oops, sorry – we’re on the side of the many, the law abiding and those who like apple pie. Whatever the issue – it comes down to Labour have spent money on it, so all must be ok.

Even where it may be the truth – it is soured by its frequent repetition and the tangential (if any) relationship it had to the question. And the questions are the one shot a backbencher gets at the Prime Minister – so the least he should do is have the courtesy to answer.

What never ceases to astonish me, however, is how many questioners come to grief because their question is too long. Mr Speaker’s tolerance for burbling on is strictly limited and he is wont to stand up and tell off the rambling questioner – who then sits down abruption with ruddy flushed and embarrassed face. You would think, would you not, that if you know that you are going to be called to ask a question because your name is on the Order Paper – you would have prepared for your 60 seconds in the limelight. You know the other members will start to jeer if you ramble on. You know Mr Speaker will cut you off. And you know that the Prime Minister will then cut you down to size because of your incompetence in questioning. And yet – time after time – I see really experienced members make this mistake – obviously carried away by the spotlight they forget how cruel the House is to those who stumble.

Boy Dave Cameron does the opposite. He over prepares. His soundbites are sometimes well worked out – but so studied that they fall flat. He has had some good moments – but to me – comes over as completely false – with no sense of belief behind his nifty nips at TB.

Does this all achieve anything other than the damage it does to the public standing of politics? The favourite answer of insiders is that it does have a big administrative effect – because everyone working in government knows that once a week, at PMQs, the Prime Minister may have to stand up and explain away their mistakes – and so in preparation for PMQs civil servants search out possible problem areas and demand explanations on behalf of the PM. Being put on your toes like this every week most of the year may help improve services at the front line, but I’m doubtful this is really the best way of doing things.

So can it change? Doubt it as long as the boys run the show. It is too close to their public school ya boo bullying for them to give it up. It obviously makes them feel like big boys with their ‘friends’ shouting them on from behind and jeering and making rude remarks about the other side. Some women join in – but to a much lesser extent. I think it is absolutely ludicrous. But as long as the media take their lead from this weekly ritual – it will persevere.

0 thoughts on “Prime Minister's Questions: is there a point?”