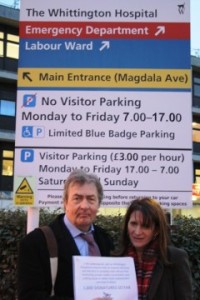 Local MP Lynne Featherstone, along with Liberal Democrat Councillor David Winskill, has met with Whittington Board members to discuss their public engagement programme, and to ask for updates on their Foundation Trust application.

The MP for Hornsey and Wood Green has been pushing the Board to engage fully with the public ever since they announced controversial plans to make changes to the Hospital. Over 2,700 residents have signed a petition, supporting the MP’s call for engagement.

At the meeting, the Board informed the MP about their engagement process, which has involved open weekends, seminars, public meetings and liaison with local community and interest groups.

The Board confirmed that the engagement period would end on the 31st of May, and that their plans would then be reviewed in the following months. They will then release the revised plans.

The Liberal Democrat MP’s petition also calls for assurance that there will be no loss of service and proper consultation throughout this period of change. She has met frequently with the Board since the announcement in order to find out the facts and work constructively to secure the future of the hospital.

“There is a growing consensus that some changes must be made to secure Foundation Trust status, and therefore the future of the Whittington Hospital.

“Initially, for instance, Labour called for no changes– yet now one of their own councillors has spoken out and admitted that campaigning against any changes at all will do more harm than good to the hospital.

“All along, the local Lib Dems and I have recognised the need for some changes. However we have campaigned hard to ensure no services are lost and that the Whittington engage with the public and review their plans accordingly.

“I’m very glad that the Whittington Board has undertaken a programme of engagement – though I still feel more could be done to bring the details of the situation to the wider community. I will continue to ask them to do more.

“In the meantime, anyone who has strong views on the plans, and on the future of the Whittington should contact the hospital as soon as possible – as this engagement period will end on May 31st. I will also be emailing my constituents to let them know.”